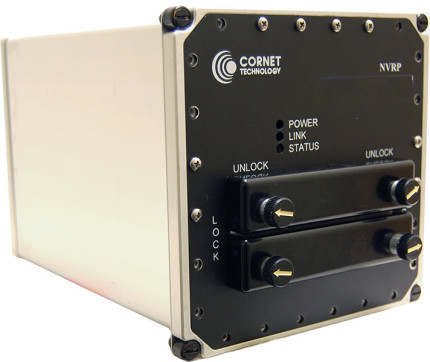 Demanding aerospace applications require solutions that provide optimal performance in harsh environments.  Meeting this requirement is the rugged iVDO NVRP (Network Video Recorder/Playback) that records, stores, and plays back up to six MPEG-2 and/or H.264 video streams along with audio and metadata. the unit’s simultaneous recording and playback feature enables users to view live and stored video while the unit continues to record.  The iVDO NVRP  complys with STANAG 4609 and meets all required safety and environmental specifications for airworthiness.

Storage Capacity:
256 GB
Removal:
In less than one-minute
Record & Playback:
In 30 sec. installed and configured
Data Storage:
In blocks sized to ensure that no more than 60 sec. is lost in case of unplanned power loss

Learn About Other Cornet Products and Solutions